Info: Abner Newton built the barn on the property he leased from the van Rensselaer family. It was later purchased by Mr. Smith Morey. The barn’s architectural style most closely resembles a three bay English barn designed for threshing and crop storage. After 1850, these threshing barns began to be modified to include areas for livestock. Currently, the Smith Morey barn hosts the Children’s Barnyard.

Provenance: The Farmers’ Museum purchased the barn from Marie Hankle, Nassau, NY on March 26, 1999.
*Marie Hankle transferred the title of the property (3.09 acres) to herself on August 27, 1993 when East Nassau officially incorporated itself. Her property was no longer deeded in the Town of Nassau but instead in the Village of E. Nassau.
*Marie Hankle purchased the property (4.13 acres) from Smith and Leah Coonradt on October 17, 1977.
*Smith and Leah Coonradt bought the property (110 acres) from Leon C. and Ella M. Daniels on October 15, 1942.
*Leon and Ella Daniels bought the property (110 acres) from George M. Isaac on September 16, 1939 for $2000.
*Floyd Terry bought the same 110 acres from Leon C. and Ella M. Daniels on July 15, 1930.
*Leon C. Daniels bought the same 110 acres from Susan J. Coonradt on June 14, 1920.
*Susan J. Coonradt acquired 40 acres from Stephen E. Coonradt on May 7, 1888.
*A previous deed listing states that there is a deed from J. S. Harris to S. E. Coonradt in B177 P532 presumably at the Rensselaer County records office.
*It is believed that Smith Morey purchased the barn and driveshed (1840-1850) and then moved them to the location they were in 1999.
*In 1790 Abner Newton signed a lease of indenture with Stephen van Rensselaer III and built the barn and driveshed. 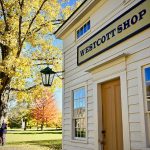