Info: Middlefield. Its symmetrical boxy appearance and front gable mark it as an example of vernacular Greek Revival architecture. It currently seves as The Crossroads Village’s Print Shop. Printers of the 1840s would have served the printing needs of its community through production of a local newspaper, advertisements and books. 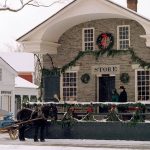