Info: The Herkimer Summer Kitchen and Woodshed was attached on its original west end to the main Herkimer family home. Separate kitchens and woodsheds of this type were built in the Mohawk Valley during the nineteenth century, reflecting the influence of German settlers in central New York. 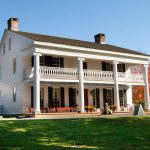