Info: The Blacksmith Shop originally served the New Berlin area. Today the blacksmith shop represents the trade and activity of the 1840s. It has two stone forges just as the original shop did. One was brought from Cooperstown when the shop first opened and the other was built in 1981. In addition, there are smaller forges made of cast iron and wood. The Farmers’ Museum built the enormous bellows that help fuel the fires.

Today the blacksmiths make iron hooks in the stone forge, sharpen hand made nails at the grinding stone, and hammer wrought iron items such as door handles at an anvil. The work produced here can be seen all over the Crossroads Village and is available for sale at the museum stores. 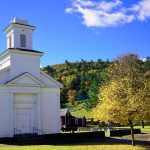 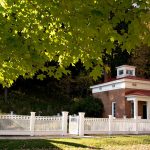