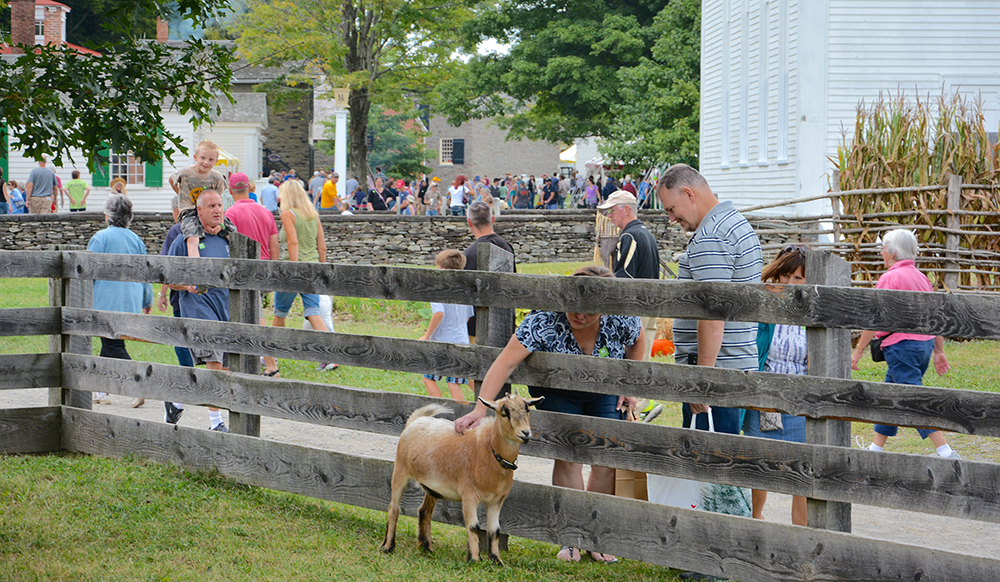 The Farmers’ Museum is home to a variety of beloved special events that visitors look forward to year after year. Each event also provides us with an opportunity to welcome new friends, as our signature event series is more popular than ever.

The 2015 event season kicked off with Sugaring Off Sundays, where 2,815 people enjoyed a delicious pancake breakfast while learning the history of the local maple industry.

Long-standing fall favorite, Harvest Festival, attracted 2,967 visitors who enjoyed family entertainment and activities, shopping with regional vendors and experiencing the autumn beauty that The Farmers’ Museum has to offer. Tractor Fest, held on Columbus Day weekend, had its second best year since the event started in 2010. Showcasing classic tractors, small engines and other machinery, Tractor Fest is a true celebration of our agricultural heritage.

Attendance for six Step Back in Time themed-weekends totaled 3,500 visitors. Carousel Weekend, Civil War Weekend and Blacksmithing Weekend were the most popular of the themed events. The museum’s “Things That Go Bump in the Night” Halloween program continued to be a popular event attracting 383 visitors on three separate evenings, nearly 100 more attendees than in 2014!

The event season closed with the most successful Candlelight Evening in our history. A record 3,544 visitors enjoyed a beautiful evening at The Farmers’ Museum, taking advantage of unseasonably warm weather while they enjoyed special programs and performances in the Historic Village, which was decked out for the holidays in traditional greens and thousands of candles. 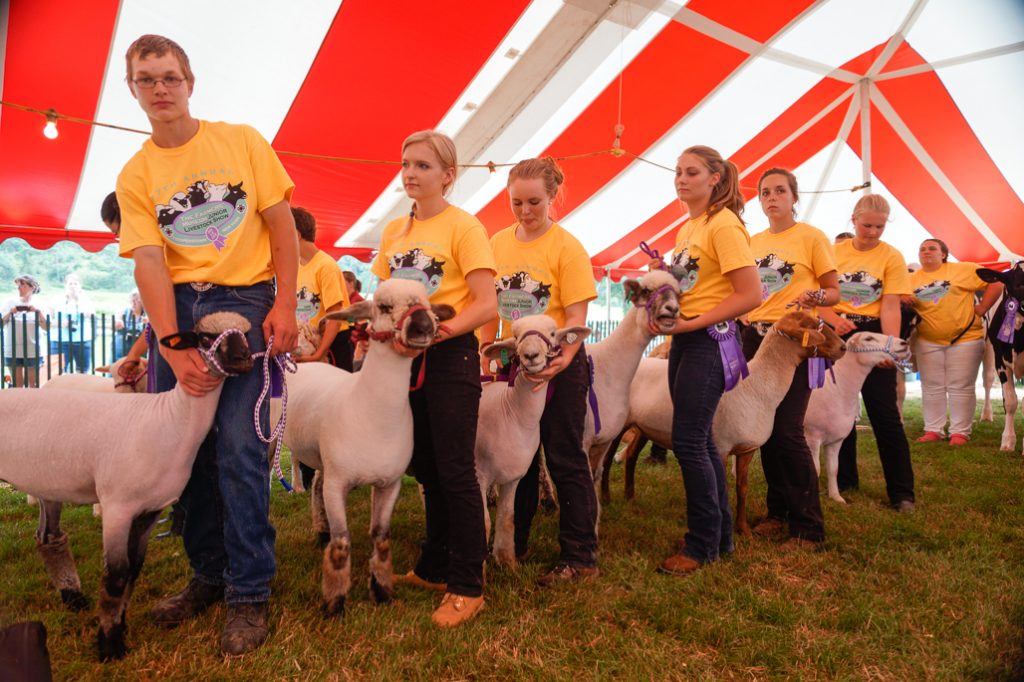 Participants line up for the Parade of Champions at the 2015 Junior Livestock Show.

The 68th Annual Junior Livestock Show was held July 12-14, 2015 at the Iroquois Farm Showground. The number of exhibitors (275) and animals (612) participating in the event was up from 2014. All 35 award classes were sponsored by generous supporters, and Chobani co-sponsored the Sunday BBQ and continued to provide Agricultural Leadership Scholarships, given to four high school students who were selected based on their essays. 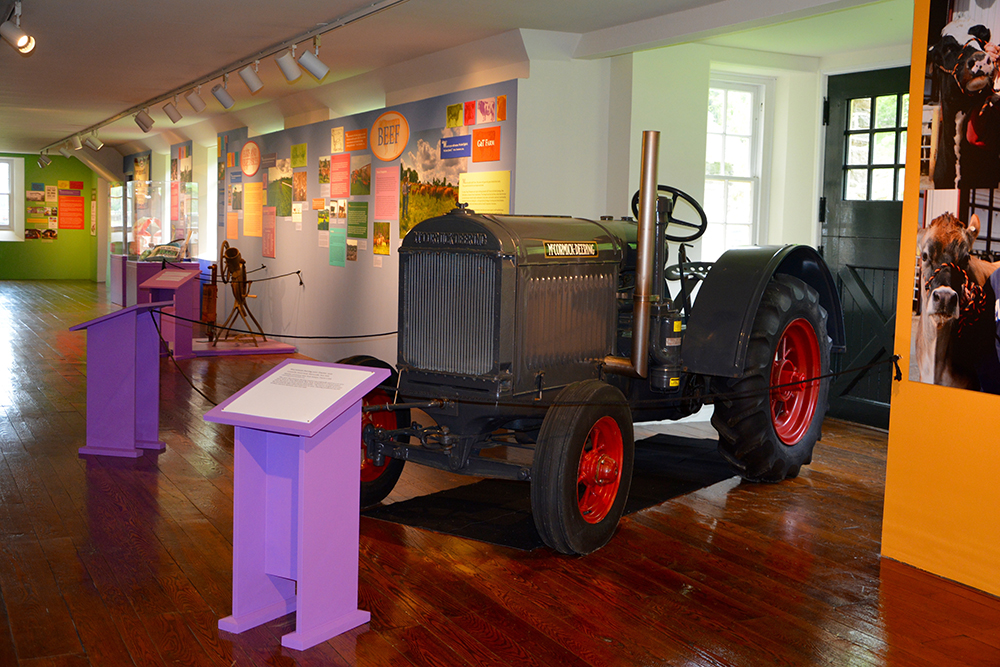 Farming’s New Era: From Field to Table in New York State on display in the Main Barn.

What do we eat, when do we eat it, where does the food come from, and how does it get to our plates? Farmers in New York State employ the latest technologies, as well as historical practices, to increase the quality and availability of their crops. Today there are fewer farms and farmers, but they are producing more food and feeding more people than ever before. Thanks to the use of emerging technological developments, commercial farmers can manage crops and herds more efficiently for sale to their regional markets. Other smaller-scale farmers are using historic agricultural practices to raise desirable products well-suited to their geographical region and commercial markets. Still others are using a combination of both.

With several seminal acquisitions in 2015, the Museum continued to demonstrate the impact the Plowline project can have in showing change over time in agriculture. The addition of an archive of the Gardner Seed Company in Rochester, NY helped create a greater understanding of the effects of hybrid vegetable varieties on production in the early 20th Century. Impactful, documentary images of Lancaster Big Crop ensilage corn, which grew upwards of seven to eight feet tall, greatly increased farmers’ ability to feed their herds with less input. A large glass plate negative collection by photographer Arthur Austin added vivid, bucolic images of cows grazing, the Ouleout creek, county road scenes and streetscapes in Franklin, Delaware County, NY before the arrival of key infrastructure such as paved streets. A donation from Joyce Turner Ogden revealed an intimate glimpse into the impact of farming on a family of the 1950s near Syracuse, NY. To support his family, Wayne O. Turner started a truck farm later in life, selling his produce from a repurposed school bus at local Farmers’ Markets to make ends meet.  Contrasting these early collections are portraits from 2010 and 2011 by Richard Walker of youth posed with their livestock, and the resurgence of younger farmers growing produce, hops, dairy and beef within our local communities.  With the continued support of The Tianaderrah Foundation, we strive to create a greater understanding of the transformations in agriculture over time and the progress related to technology in the farming industry. See images from these and other acquisitions at plowline.farmersmuseum.org.

Grain Drill. Crown grain drill made by Crown Manufacturing Company of Phelps, NY. 1875. Gift of the Kreiger Family in Memory of Frank and Olive Kreiger.

Real photo postcards and photographs. Group of 27 items including those of Summit and Warnerville by Henry C. Sollman of Cobleskill, NY. 1890-1970. Museum Purchase. 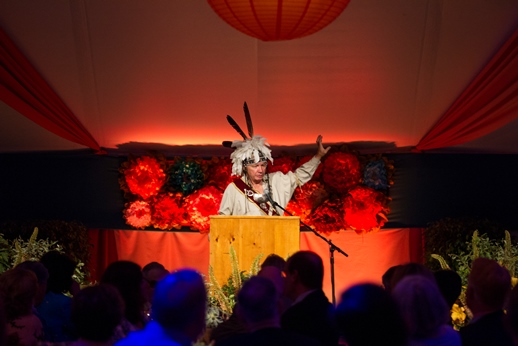 In celebration of the 20th anniversary of the Thaw Collection of American Indian Art at the Fenimore Art Museum, the Annual Summer Gala took place on Friday, July 17th. Hosted by Jane Forbes Clark, and held at the Glimmerglen property, the magnificent event honored Clare and Eugene Thaw while supporting the museums’ educational programs. Inspired by the exhibition 50 at 20: Masterpieces of American Indian Art from the Thaw Collection, the event featured an on-site exhibition of pieces from the collection as well as a performance by Grammy award-winning recording artist Joanne Shenandoah and her daughter Leah.

Thank you to the evening’s generous sponsors who made contributions to support educational programming in honor of Clare and Eugene Thaw: