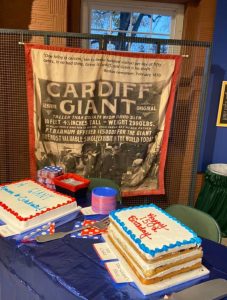 The Cardiff Giant, a ten-foot-long gypsum figure known as “America’s Greatest Hoax,” has been on exhibit since 1947 at The Farmers’ Museum. The Cardiff giant exhibit traces the story of this “petrified man,” which was the centerpiece of a money-making scheme by a businessman from Binghamton, New York. The Cardiff Giant was created and displaying in the 19th century, and public reaction to it reflected the scientific and religious beliefs of the time.

In 2019 we celebrated 150 years of the excitement, intrigue, and entertainment of The Cardiff Giant. There was a 150th birthday party for the sculpture, including cake and a party hat. The Templeton Players also performed an original Medicine Show related to the giant on the Tavern Green throughout the summer, and at the birthday party. 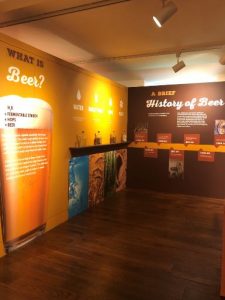 Between 1840 and 1900, New York State grew more hops and brewed more beer than any other state in the country. Since 2000, brewing beer on a small independent scale has been at the forefront of the Grow Local movement. Today, New York State has more than 400 craft breweries and a new generation of entrepreneurs are resuming New York’s leadership in craft brewing. In turn, the craft beer revival is sparking a resurgence in both agriculture and tourism, supporting the local economy and communities.

BREW: New York’s Craft Beer Revival is originated by The Farmers’ Museum and features objects, images, and text highlighting the history of New York State brewing, hops, and barley up to the present day. Central New York’s breweries and beer experts share their stories and process in this engaging exhibition. The exhibition is on view May 11, 2019 – December 31, 2020.

Massachusetts native Joseph Whiting Stock (1815-1855) painted more than 900 portraits over a period of twenty-three years while using only a wheelchair for mobility. Paralyzed in a traumatic accident at age 11, Stock suffered from additional complications for the rest of his life and, defying medical odds, became one of the country’s most admired folk artists. Despite physical challenges, Stock pursued an active and useful career, remaining optimistic throughout his life, which, no doubt, contributed to his success. Visitors could see both a panel display with 19th– century medical objects from our collection are featured in the Doctor’s office at The Farmers’ Museum, as well as artwork by Stock in the first-floor hallway of Fenimore Art Museum.

Sleigh. Bob sleigh once in the collection of the Carriage and Harness Museum, 1910-1915. Museum purchase. 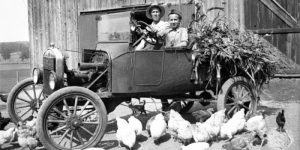 Since 1942, The Farmers’ Museum has set out to cultivate an understanding of the rural heritage that has shaped our land, communities, and American culture. To achieve this, we have collected objects of American farming and rural communities, displaying those in a method accessible to all who are interested. Since the opening of the museum in 1944, with 5,000 tools and objects, the museum has grown to hold more than 23,000 artifacts of rural life. Because the museum’s footprint of 35 landlocked acres has remained the same through the years, and agricultural equipment has become larger, the collecting of these objects has been somewhat prohibited. As we moved in the 21st century it became apparent that a new collecting initiative would be needed to combat this situation.

Our collection has come from a variety of sources including antique photography shows, as well as donations from local photographers, families, and collectors who share our passion for preserving our past, present, and future through images.

Over the course of 2019, several wonderful collections were acquired. The first collection of the year was a digital collection from photographer Wesley Bernard entitled “To Grow A Farmer”. This collection shows contemporary farming families in upstate New York. It is a series of portraits of farmers who have “found innovative ways of surviving this economic climate along with families or individuals who have managed in unique ways to start and sustain new farms.”

In the summer of 2019, the museum acquired a collection of twenty-nine glass plate negatives of Morris, NY, that includes homes, businesses, waterways, and the county fairgrounds. In addition, this collection holds many images of rural life from areas including but not limited to Bainbridge, Oneonta, Hamden, and Buffalo, N.Y.

Mr. Wayne Franklin, author of several books on James Fenimore Cooper, as well as A Rural Carpenters World: The Craft of a Nineteeth-Century New York Township (American Land & Life), based on the 1869 journal of New York farmer and carpenter James C. Holmes, generously donated a collection of family photographic archives of the extended family of James C. Holmes. These images include rural activities from Otsego and Schoharie Counties as well as a series of images from a visit of The Buffalo Bill Show to the area. In addition, glass plate negatives from the working archive of photographer Lynn M. Reightmeyer of Richmondville, Schoharie Co., N.Y. was also donated in this collection.

Finally, in November a collection was acquired that included a family photo album entitled “History of the Farm in Pictures” from the Fowler Family Farm in Middlefield, N.Y. Depicted are several images of 1910 Arbor Day festivities in Mayville, N.Y., and many other images from areas such as Rochester, Pompey, Lisbon and Milford, N.Y.

In archiving the collection, the highest standards are taken for the care, housing and digitization of the images. Objects are housed in archival material and storage for the collection is climate controlled. The objects are digitized to the current standards in the field for both easy access and preservation.

To enhance their accessibility, many of the photographs in this continually growing collection can be found on our website at http://plowine.farmersmuseum.org. This site is interactive, as users can comment and post to social media or email links. Topic experts can provide their knowledge and interested parties can contact the Plowline curator to request to view, reproduce, or otherwise use the images, at [email protected] or by calling 607-547-1449. 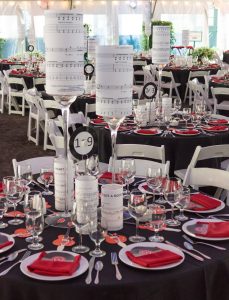 On July 12th, Fenimore Art Museum and The Farmers’ Museum held their annual summer gala. The event was held at the Iroquois Stable and Greenhouses, which allowed guests to tour the museums’ art collections in the storage facility on site. The theme of the event was inspired by the Herb Ritts exhibition at the Fenimore. As always, the evening included a delicious meal and the excitement of live and silent auctions, as well as a live band. The guests pledged just under $16,000 of support for school trip scholarships.