The Farmers’ Museum comes to life each day thanks to the dedicated interpreters who share their knowledge and craftsmanship with our visitors. Leading the way are our dedicated, master interpreters. 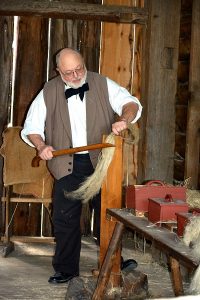 After starting with knot tying in Boy Scouts and being taught to crochet by his mother in high school, Garry taught himself to knit in college. After a program at a local Historical Society meeting on raising sheep and spinning yarn, he purchased a couple of sheep and a spinning wheel in 1974, followed by a loom two years later. He became a member of the Farmers’ Museum at that time to garner help and information from the staff.  After organizing the Leatherstocking Spinners Guild in Little Falls, Garry started working at the Museum in 1986 at the Lippitt Farmstead, shifting to textiles a few years later. He is also a proficient dyer, tatter, felter, rope maker and bobbin lacer. 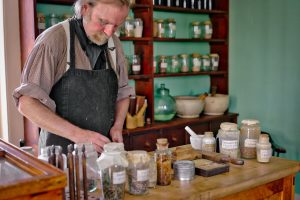 After obtaining a BS in History from SUNY Brockport, Patrick started as an interpreter at The Farmers’ Museum in 1992, where he brought his passion for homesteading and wildcrafting. He has spent over 25 years researching, studying and training in herbalism, gardening and pharmacological history. A long-time member of the American Institute for the History of Pharmacy, and a coordinator for the Healing and Intuitive Arts Alliance, he is the former town historian for Hartwick, where he lives on the land which was the original location of Dr. Thrall’s Pharmacy, now located at The Farmers’ Museum. 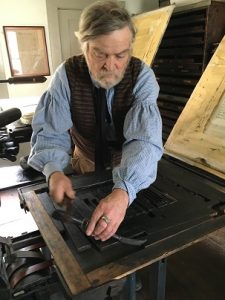 The son of antique dealers in Schoharie County, Ted’s love and appreciation of history comes from growing up in a house entirely furnished with antiques, sleeping on rope beds and eating off pewter dishes. He holds the positions of Town Historian of Cobleskill and Schoharie County Historian, and has been doing regular presentations to various Historical Societies and community groups since the early 1990s. A Civil War re-enactor since 1982, he is now the Captain of the 125th NYSVI and coordinated Civil War weekend at The Farmers’ Museum in 2016, where he has been an interpreter since 1996. His personal collection of antique printing equipment and his interest in typography and design make him uniquely qualified to interpret and conduct workshops at the Printer’s Office. 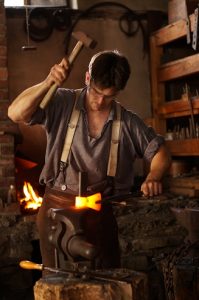 A self-taught blacksmith since the age of 13, Eric has become one of the leading figures in historical blacksmithing in the United States. He has been practicing blacksmithing professionally for over 10 years and has worked with other world-class history museums such as Fort Ticonderoga and Colonial Williamsburg to forge historical reproductions. His blacksmithing experience, combined with his expert knowledge of 16th to 19th-century American History allow him to recreate artifacts, and uncover and document long-forgotten forging techniques. 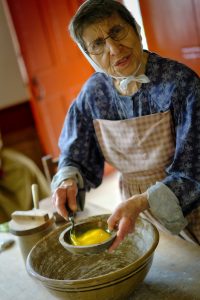 Pat has been cooking, baking and preserving foods since her mother taught her domestic arts at a young age. After growing up in Cleveland, OH, she moved to the Cooperstown area in 1987, becoming an interpreter at The Farmers’ Museum in 1990. She has been demonstrating and teaching open hearth cooking, bread baking, butter and cheese making, and meat brining and smoking. A lifelong learner and educator, she has taught domestic arts to new staff and conducted cooking workshops for the general public, school children, and special needs visitors.

As a new theatrical feature, The Farmers’ Museum’s Templeton Players presented John Maddison Morton’s one act comedy, Box and Cox, on our new Leatherstocking Stage situated on the Tavern Green.  The play was first produced in London in 1847 and quickly crossed the Atlantic where it was hailed as the “the best farce of the nineteenth century” by The New York Times.  Though the setting and language are of an earlier time, the characters and plot are as relevant, relatable, and utterly hilarious to audiences today.  The story centers around two men who find themselves tricked into occupying the same apartment by a crafty landlady, and later trapped in an awkward love triangle where neither wants their shared fiancé.  In comedy, timing is everything and Box and Cox ran on weekends Memorial Day through Harvest Festival, much to the delight of our museum visitors.  To complement this production, the Templeton Players continued to offer dramatic reenactments depicting important moments in the Women’s Rights Movement and Anti-Rent Wars, as well as a moving speech on “The Meaning of July Fourth” by an actor portraying Frederick Douglass.  History brought to vivid life!

Other Notable Programming at The Farmers’ Museum

A Celebration of Our Agricultural Community:
Climate Change and Its Impact on Farming in Central New York

Blacksmithing Step Back in Time Weekend

Thanksgiving at the Farm

Things That Go Bump in the Night