WEEKEND PERFORMANCES ON THE TAVERN GREEN
SATURDAYS AND SUNDAYS at 12:00 & 2:00pm

Box & Cox, featuring: Mackinaw Shutt, Rob Shutt, and Judy Greenberg. Join us on the Tavern Green for this renowned British farce, first performed in 1847! Mrs. Bouncer, a brazenly clever landlady, has set up a scheme to rent the same room to both Mr. Box and Mr. Cox, as they have opposite schedules! But just how long can she keep it up before something goes terribly wrong?

A Case for Eviction, featuring: Diane Stammel, Charlie Reiman, and Linda Reese. Join us on the Tavern Green for a performance of this rare comedic gem, first performed in 1885. Frank and Dora are a newlywed couple who are tormented by an unwelcome houseguest… Major O’Golly. As their increasingly desperate attempts to kick him out continue to fail, they begin to ask… What if the major NEVER leaves? 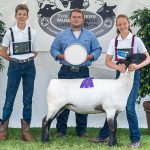